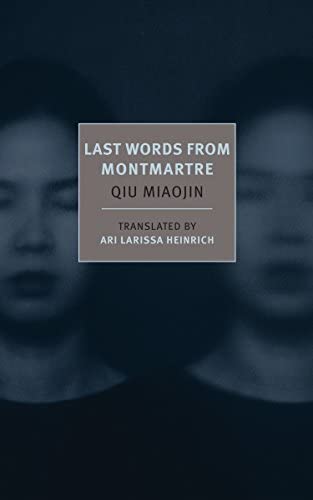 1.28.23 LAST WORDS FROM MONTMARTRE (1996) i have finally finished reading through qiu miaojin's last piece of work, and it feels incredibly bittersweet for me. i remember reading notes of a crocodile for the first time and was in complete awe of miaojin's writing style, i found it to be almost poetic, but what's really stuck with me is how much i see myself in her writing of this book. with notes of a crocodile, i loved the book but i wasn't highlighting dozens of lines of text like i did with last words from montmartre, not because i found it weaker, but because i felt like these words were resonating with me on an entirely new level. the main character of this book struggled with isolation, with a painful love, struggled to understand humans and the purpose of suffering in life which is something i've been wrestling with for the past few months. it felt eerie to read certain passages from this book and feel like it was speaking from my emotional perspectives, especially on feeling othered by the world. i remember being shocked when i read the reviews for notes of a crocodile because a lot of people felt like miaojin was writing with too emotional and found her characters to be excessively dramatic, but i was so enraptured by these depictions of beautifully flawed humans. i know many go into these books thinking solely about miaojin and her eventual suicide, but i think that takes away from these pieces of writings. did miaojin even want this one published in her lifetime? had she lived on, would we have ever seen this book come to light? regardless of the moralities behind posthumous releases, i'm still thankful i was able to experience reading this book. miaojin was able to write such perfect examples of flawed characters, never shying away from infidelity or emotional abuse, and that's what i enjoy so much about this book in particular. the despair and tragedy of it all is so palpable when you read through, it feels like you're seeing the insides of a person's heart in such extreme depth. the parts that have resonated with me the most, and have helped me to understand a little bit more about my own feelings, are the smaller lines referring to the main character's misanthropy after experiencing such a devastating heartbreak. this character understands that in the end, maybe her hatred towards human behavior is just a deeper hatred for the fact she sees those same traits within herself. it's almost too real for me to cope with. reading this book, i wonder if i've ever experienced a love like the one depicted in this, a love so raw and deep that the wounds of it are almost unbearable to live with. have i ever loved someone so much to the point i'd give my entire life for them, to reflect on them day and night, to devote my entire self to them despite it all? it's quite scary to imagine, whether having experienced it or not, because it's almost like a madness. oh, the yearning of it all!

anyways, i feel so seen through qiu miaojin's works, and though her time was brief, i'm so grateful i was able to experience a book like this. 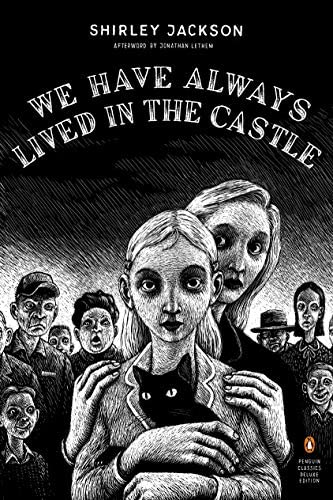 12.31.22 WE HAVE ALWAYS LIVED IN THE CASTLE last book read in the year 2022! this was my first ever shirley jackson book and i don't think i've loved a book this much in awhile, having finished it within 3 days of starting it. just by looking at some of my other reviews on media, one could guess that i'm a lover of strange family dynamics and this book was completely perfect with that in my eyes. the dynamic mary katherine and constance share is so intriguing, an older sister who, prior to the loss of her family, was constantly made the housewife to clean up after everyone else, while mary katherine is the younger sister who is extremely protective over the things she loves and would stop at nothing to ensure her life is perfect just the way she envisions it. when things don't go her way and the facade starts to crumble, she casts spells and causes trouble just to ward off anything attempting to intrude on her and constance's seemingly perfect life. the codependency they both share is so fascinating, constance never feeling like mary katherine is an inconvenience despite mary katherine's almost extreme proteciveness over her and the house, while mary katherine's anger and violent nature towards outsiders never leaks into how she feels towards constance, never blaming her.

shirley jackson's ability to create such incredible characters with dynamics i rarely ever see is just amazing to me, and i will be reading more of her work soon! i did actually watch that movie loosely based around shirley jackson starring elizabeth moss and while i did like the movie, i never really knew much about her work. i'm so glad i read this one though, i feel like i could talk about it for days! 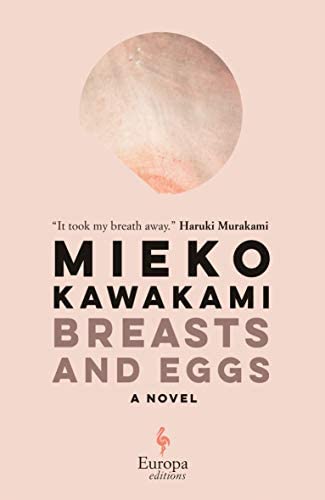 12.29.22 BREASTS AND EGGS (2008) I have finally finished reading this, and I'm so glad I decided to check it out. After browsing through reviews of this on StoryGraph, I'm kind of shocked how others recieved this one. Seeing as there is two books, or rather parts, most found the second half to be ill-fiting and boring in comparison to the character dynamics in the first half, but I actually enjoyed both halves of the story.Nearing the end, I enjoyed the minor tidbits about aging, illness, death, life and birth as most of these topics are things I struggle to confront. In the last couple of pages, the main character, Natsuko, goes on a spiel about the topic of aging:

"I always thought it was so funny. Once you hit eighty-five or ninety, you gotta figure you've got what, like five or ten years left to live, right? I mean, you know you're gonna die before too long. That's gotta be weird. Seriously, what's that feel like? To say to yourself I might not be around this time next year . Know what I mean? You know that you're not dying someday. You're dying soon. What do you think that feels like?"

This passage stuck with me because it's a deep-seated fear I've had since I was a child, the reality of aging and dying, but most people have the luxury of knowing you'll die someday, not soon. Natsuko also goes on to say that those who are nearing the ages of ninety never really show that fear, that they seem calm but do they really feel that way? I think though that getting to that age leaves a person with enough time to address those fears of dying, to accept life as a reality and impermanence as a whole. Aside from that, I loved this book because it addressed so many things I myself could relate to, like womanhood and the struggles of trying to find your place in life while it seems everyone around you has already figured it out. Cheesy to say, I love that this book was able to teach me so much more about childbirth and producing children through sperm donors, how some children of donors experience life as they grow older, and the ethics behind it all. I have a soft spot for books such as this one that are really reflective on life, it's journeys and the hardships that come with it, and how a person fits in to the lives of everyone else around them.

I'm also overjoyous to hear that the author of this book, Mieko Kawakami, did an interview with Haruki Murakami where she critiques his depiction of women within his stories, seeing as authors like her are able to have a multitude of female characters with such distinct personalities and character without them being centered around a man's journey. I still find myself liking Murakami's work, whether that's good or bad... anyways, this book was really worth the read! I did find some parts rather slower than others, but I really enjoyed the ending and I would definitely read another one of Kawakami's works.

9.4.22 "CARMILLA (1872)" this might be a pretty lame review because it's been awhile since i finished this one, but after finishing this book, it made me feel like a twilight fangirl from the 2000's. i became so obsessed with vampire genres and gothic literature/aesthetics, even went as far as making fan art. sheridan le fanu did more for me than any modern lesbian representation ever will!

jokes aside, i really did love this book so much, and some of the quotes were so beautifully written to me that i saved them in a notepad file so i would not lose them. i think there's something to be said about how this book was written with the intent to scare and horrify the audience at the time it was written, but reading it now with a modern perspective makes it seem much more like a romance. even in the end, laura still holds on to the hope of carmilla making a return to her room, and i'll take the artistic liberty of saying she missed her. i think one of my favorite parts of this book was the usage of anagrams for carmilla's various identities, it felt like a comedy bit where a man dresses up in different disguises that do little to hide who he really is, yet no one but the audience takes notice. i know this was the intent, still funny to think about.

i don't want to consider this entry as a review, as it is more like a recommendation because this novella is so near and dear to me, so please read it! it's quite short, so i say give it a try if you ever need something to read to pass time. here are some of my favorite lines from the book because i want to save them:

"You will think me cruel, very selfish, but love is always selfish; the more ardent the more selfish. How jealous I am you cannot know. You must come with me, loving me, to death; or else hate me, and still come with me, and hating me through death and after. There is no such word as indifference in my apathetic nature."

"But to die as lovers may - to die together, so that they may live together."

“If your dear heart is wounded, my wild heart bleeds with yours.”

"Girls are caterpillars when they live in the world, to be finally butterflies when the summer comes; but in the meantime there are grubs and larvae, don't you see - each with their peculiar propensities, necessities and structures."